11.05.16
Schedule: 40min Tempo
Distance: 40min with hills instead = 5.5km. Ran the biggest hill all the way without stopping, which is a big deal for me! Total run was actually 6.5km in 47min.
Daytime Distance (commute + shift): 11km.
Music: Fall Out Boy’s American Beauty / American Psycho album played straight through and then repeated.

15.05.16
Schedule: 15km long run
Distance: 17km. Ran with Colin and Dianna in Squamish. Completed the Coast Mountain Trail Series’ Survival of the Fittest long course, minus the short downhill/uphill of the start/finish. Since they are in the final taper for their race the distance was short enough that I could finally tag along! I’ll be doing the SOTF short course in 2 weeks so it was a nice preview.
Music: N/A

Note: Remember to take your vitamins! The difference in how I felt between Week 4 and Week 5 was night and day once I started taking my vitamins, and specifically my iron, again.

01.05.16
Schedule: 11km long run
Distance: 0km. Didn’t work out with Colin’s run schedule and then had errands and a work shift. Oh, well… At least the distance isn’t what I’m worried about.
Music: N/A

11.04.2016
Schedule: Strength + Stretch.
Distance: None. Comfy pants won this round. Way to start the cycle right!
Music: None. See above.

12.04.2016
Schedule: 5km run.
Distance: 5km mall-walked instead while waiting for Colin to pick me up  + 12km walked during the course of my shift = 17km.
Music: Whatever the mall was playing. Nothing memorable.

13.04.16
Schedule: 30 minute tempo
Distance: 6km. I have no current pacing ability. I was all over the place due to a hillier than recommended route. Next time it’ll be flat(er).
Music: Squamish 50mi playlist on shuffle. Highlights were Rage Against the Machine, Pearl Jam, and White Stripes.

17.04.16
Schedule: 10km long run
Distance: 9km long run. Terrible run. Ran from a training shift out at UBC back to Kits Beach. While the weather and scenery were good that’s about the only nice thing I could say about it… (The intramurals including 20 min HIIT session did not help my legs.)
Music: Pearl Jam, because I didn’t remember to take it off of that before starting.

Surrey Half Marathon – A Much Belated Recap

First and foremost, my sincerest apologies to the Surrey International World Music Marathon for this oh-so-late recap.  As a marathon blogger I fully admit that I fell down on the job…  Better late than never (right?!).

I ran the half marathon on 29 September 2013 and it was my second year doing this race.  As my last post explained, I was not as prepared as I had originally wanted to be.  I was going to go out and run to finish.  After that post went up my Twitter (now real life) friend, Brandi, told me that she wanted to run the half on a whim.  She was going for sub-2:30 and, as I didn’t have any sort of goal, I said I’d run it with her if she wanted me to.

On race day, Brandi and I met up near the start line.  She was with a couple of other friends, one of whom (Kendall) was running her first half ever, and, after I said goodbye to Colin and Spud, we all huddled in the crappy fall weather together.  Wind and rain is perfect for race day, don’t you agree?  Yeah.  That was a fun treat.  I decided warm and soaked was better than overheating with a jacket, but it was super chilly to begin with.

We started out together with the intention of keeping with the 2:30 pace bunny.  However, after only 1-2 kilometres Brandi and the others were pulling away.  I decided to stick with the pacer and let them go.  In the almost 5 years I’ve been running I have never once run a race with a pacer.  I thought I’d give it a go.  Surprisingly, I was able to keep up for the most part.  I’d lose her a bit on the ups, but catch up again on the downs.  I was surprised to hear, somewhere around 8km, that we were actually running a mid-6km/hr pace (pacers run 10min/walk 1min and accommodate for walk breaks).  I have huge self-doubts when it comes to running fast so it was a nice boost of confidence.  After that there was a long steady uphill.  I power-walked most of it, but the pacer (as well as Brandi et al.) was never out of sight.

Unfortunately, this is where my race – or rather, my shoes – started to crap out.  I knew my shoes were nearing the end of their running life since I’d taken them to Disneyland in the summer.  But, as it was my first pair of Altra Provisioness shoes, I didn’t know the indicator for dead.  In my old shoes it was always my knees.  At 12km I started to get severe hip flexor pain.  I haven’t had that in years!  That was obviously the indicator!  And so, I slowed down, walked when I needed to, and grimaced my way along for the next 9km.

At about 19ish-km I came upon Brandi and Kendall.  They were steady, but both hurting and ready for the race to be over (me too)!  I decided it would be far more fun to finish the race with Brandi, seeing as we intended to run together anyways.  Kendall went along ahead of us, looking strong so close to the finish.  Brandi and I decided it was for the best if we walked when necessary.  We had it figured out that we could walk a large chunk of the last couple of kilometres and still make sub-2:30.  On the last downhill we were surprised to see Solana out taking pictures (and waiting for marathoners Nikki and Krista)!  Brandi went over for a hug and I kept on going, fearing that if I stopped I wouldn’t start again.  At the last corner the 2:30 pace bunny was waiting.  It was such a nice touch that she was around to see some of us finish!

I “sprinted” to the finish, gathering Spud as I went, and we crossed the line together.  I finished in 2:27:08, taking 20 minutes off of last year’s time.

Even though I finished only a few seconds ahead of Brandi it took me a couple of minutes to find her.  But when I did I gave her a huge hug!  While I was happy with my time I was even happier (and super proud) that she got her sub-2:30!!

Totally stole this from Brandi’s blog…

Oh, and did I mention that the medals for this race are obscenely huge?!

It’s that time of the running year when training for a fall event is in full swing. And, amazingly, I have a fall race to train for. I have been asked to be a blogger for the Surrey International World Music Marathon! I was a blogger for their inaugural race in 2012 and I’m excited to be invited back.

Last year I ran the half on a bit of training and, while I had a good time, it was nowhere near to being a PR-worthy race performance. This year things are different. I’ve been running a lot more as well as cross training. I am hoping that I can PR or at least come close! I am also hoping the medal is similar to last year’s 3″ round behemoth!

The course this year has been redone to be less on closed roads and more in city parks. This should be great for the runners! I live close to Surrey, but rarely go over (have to cross a bridge!) so it will be nice to see a bit more of the city.

If you have other goal races – I know there are lots in October – this is a great opportunity to give back to the running community and volunteer. I’d love to see / hear you out on course! You can sign up here: www.surreymarathon.com/volunteer. 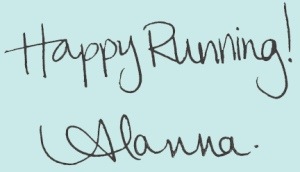 Source
And just like that my 2013 A-race is set! Extremely excited to #RunVan again. Goals coming soon, but I have a half to run on Sunday first.

Love My Runners
Create a free website or blog at WordPress.com.