Despite finding out that I wouldn’t be running with these ladies in August, this week has turned out to be a decidedly glass-half-full kind of week.

1. I get to run Ragnar NW Passage in July. And when I said with Nuun, I meant with Nuun – it’s their corporate team. I’d be silly to turn down this opportunity and I’ve already been stalking the legs trying to decide which one I want!

Arm warmers – probably in black since that matches most of what I wear.  Not exciting, but I’m not too much of a pink-loving girl and the orange ones won’t go with diddly in my running wardrobe…

Long Roga short, Stride short, or Bum Wrap – do I want to hide my thighs, suck in my bum and thighs, or hide my bum?  I’m leaning towards the Roga simply because they look like they’d transfer to regular wear more easily.  Yes, I do wear my running clothes as everyday clothes!  And, admit it, so do you!

Thoughts or reviews on any of these? I love the Green Lake Hoodie (and it’s on sale), but it would still use up a good chunk of the amount.  Seriously, this is like being a kid in a candy store – I want one of each!!!

3. I booked my follow up appointment for my heart-rate training for June. I was originally going to re-test in July, but they offered me a substantial discount for booking in April. This way I’ll have my new numbers pretty much right at the start of fall marathon training. It meant giving up my Brooks Pure Cadence for now, but this is better for my training at this point. I know I haven’t gotten a lot faster (been slacking on the once a week zone 3 work) however, I feel like I am getting much better at staying in zone 1. Since I’ve been doing most, if not all, of my runs on a treadmill I know I’ve increased my speed for zone 1.

4. My marathon is next Sunday (6 May). I might feel woefully underprepared in terms of breaking 5 hours and getting a PR, but I know I will finish it. I’m excited to get my shirt (will be women’s specific) and medal because they’re really nice!

5. I got to go swimming with Spud yesterday. Yes, we hang out almost all day everyday, but this was part of school so he got to play with his friends.  I am totally counting this as cross-training!  Since there were more kids than parents/supervisors I had an extra child to look after.  Turned out that their favourite activity was having me hold them as I navigated our way through the lazy river.  Of course, I had to make sure the current didn’t run us into the walls so I got a decent lower body workout while holding 40lbs under each arm!  Win-win for everyone!

What made your glass half-full this week? Any good news?

The Kübler-Ross Model As It Pertains To Running

If I’ve been a bit quiet on here lately it’s due to the fact that I had my blood lactate test done last week at Peak Centre Vancouver.

I actually thought that I did pretty well.  I ran until I couldn’t and was proud of not falling off the treadmill.  And then I got my results.

First, a little bit of an explanation.  Now, I fully understood going into the test that I would be told to run my long runs slower.  Heart-rate based training is a pretty exact science if you get tested.  You run on a treadmill and, in my case, blood is taken every 3 minutes.  Eventually you “voluntarily” quit and where you top out is where your maximum heart rate is determined.  Your blood is then tested to determine how fast you accumulate lactate.  Obviously the less lactate the better since that’s what makes you feel like you’re dying when you run.

So here’s why I haven’t posted.  I’ve been processing.  And I have to admit that they way I’ve dealt with the results is a lot like grieving.  Hence, the reference to The Five Stages Of Grief:

Denial:  What?!?!?!  They want me to run my zone 1 how slow?  That’s a walking pace! (Note: pace is personal.  My standard for slow is slow to me.  It may be way slower than yours or you might think it’s super fast.  For that reason I will not be discussing my actual paces.)

Anger:   WTF?!?!?!?!?!?  Here’s part of a fb email to my friend (who understands as she’s been tested too): I’m going to be walking my effing long runs.  I did my run yesterday entirely in the middle of zone 2.  And that felt ridiculously slow.

Bargaining:  Maybe I can just sneak in a few kilometres in zone 2.  That won’t make much of a difference, right?

Depression:  I can’t do it.  I paid good money to get tested and they’re telling me to freaking walk?  Why’d I even bother?  Another excerpt: Anyways, sitting here bawling my eyes out.  Maybe I should just drop down to the half.

Acceptance:  I know how much this will make me a better runner.  I will follow it religiously so that I don’t get stuck where I’ve been for the last couple of years.  I’ve seen how it’s benefited those friends who’ve stuck with it.  It will be hard, but it will make me stronger.

Luckily I experienced all five stages in one day.  I’d kind of sucked it up after writing the top part of this post.  I just wanted to make sure I got it down while I was feeling that way…  I’m still pretty emotionally traumatized by the whole thing to be honest.  It felt/feels like such a blow to my running “career”.   I know it won’t last forever, but, with an “it’ll probably be 6 weeks until you see improvement” philosophy, it will seem that way!

Here’s a quick and probably insufficient explanation of heart-rate based training*:

The best news that came out of my test is that I have a lot of room to improve!  My massive zone 2 range means that I can increase very well as long as I do the runs correctly. 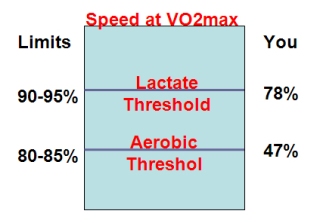 About 90% of my running should be done in zone 1 to increase my aerobic threshold.  The rest of my runs (10% or once a week) should be in zone 3.  It’ll take a while and a whole lot of discipline to get there, but I know that I’ll see results eventually.  I’m going to have a kick-ass marathon in October!
Anyone else out there had this test done?  How’d you feel about your results?  Does it get easier/better?!?

*This information is how I understand what I have been told by Peak.  I am not a doctor, lab tech, or scientist.  If anything is incorrect the error is mine.