11.04.2016
Schedule: Strength + Stretch.
Distance: None. Comfy pants won this round. Way to start the cycle right!
Music: None. See above.

12.04.2016
Schedule: 5km run.
Distance: 5km mall-walked instead while waiting for Colin to pick me up  + 12km walked during the course of my shift = 17km.
Music: Whatever the mall was playing. Nothing memorable.

13.04.16
Schedule: 30 minute tempo
Distance: 6km. I have no current pacing ability. I was all over the place due to a hillier than recommended route. Next time it’ll be flat(er).
Music: Squamish 50mi playlist on shuffle. Highlights were Rage Against the Machine, Pearl Jam, and White Stripes.

17.04.16
Schedule: 10km long run
Distance: 9km long run. Terrible run. Ran from a training shift out at UBC back to Kits Beach. While the weather and scenery were good that’s about the only nice thing I could say about it… (The intramurals including 20 min HIIT session did not help my legs.)
Music: Pearl Jam, because I didn’t remember to take it off of that before starting.

If you have read my blog for any length of time you’ll know that I don’t run a lot of short distance races.  That all changed on 3 June.  I was fortunate enough to be an ambassador for Earth Run and ran the 10k at Jericho Beach in Vancouver (there was a 5k as well).  This was the perfect race to be re-introduced to the distance.  There are a lot of larger 10k events in Vancouver – like the almost 50,000 strong Sun Run – but a small event has huge advantages.

1.  Mellow Atmosphere.  A small crowd means less opportunity for race day jitters.  I knew that I just wanted to go out to complete the distance in a decent (for me) time and not having huge crowds made it so much nicer.  It’s definite a family friendly event.  There was a small expo with about 6 tents – some vendors, some beneficiaries.  The Vancouver Aquarium and Young Naturalists’ Club of BC booths had Spud occupied for ages. 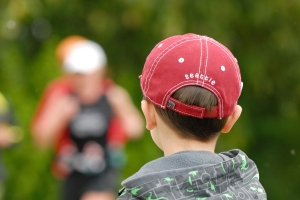 2.  Small Race Field.  If I was a faster runner this would be the race I’d want to go to!  Such a great chance of placing since there were only 71 finishers in the 10k and 48 in the 5k.

3.  Easy Package Pick Up.  Considering there was really just the chip (on a returnable ankle band to be no-waste) and shirt to pick up it didn’t seem like there was much of a wait.  I had a bit of an awkward moment when I had to find the race organizer to say I wasn’t on the list (my contact wasn’t present).  He was understanding and gave me my items.  My shirt (a unisex small) went to Colin, who’s quite happy about it.  The only problem with not being on the list is that my result is just a comma since there was no first or last name.  Oh well, I know it was me!

4. No Crowds.  The course was on an open park path and having fewer numbers was totally beneficial.  There was never the feeling that we were in the way or people were in our way.  It was an out and back along the ocean and, since the weather cleared once we started, there was a gorgeous view of the mountains.

6.  Plentiful Post-Race Snacks.  I know this seems like a silly point, but it’s nice to roll into the finish line close to the end and know that there will still be stuff waiting for you!  Oranges, bananas, water, and an energy drink were enough to tide me over until I could get to lunch.  Since the race aims to have a low to no environmental impact even the cups were recycled cardboard.

All in all I had a great time at Earth Run!  I was quite happy with my time (1:05:31) considering I really hadn’t done any sort of faster training.  I ran/walked it, but was completely fine with that.  I was breaking in my Saucony Mirage’s at the time too…  My watch did say the course was just shy of 10k, but there were two variables that could account for that: I started my watch a few seconds late and user error on the flour-marked gravel path (I’m sure I didn’t run the exact same path as measured)!  I think my favourite parts of the race were the atmosphere, the view, and having Colin and Spud waiting for me at the finish line.

Thank you Earth Run for letting me represent you online!  I had a fantastic experience and I’m sure Colin and I will come back next year to run!

Since I’m still working on my recap for Warrior Dash here are some pictures of the drive home.  I’m so blessed that all this is within a 2-1/2 hour drive from my house…

I tried to get a great shot of Vancouver from the highway coming into town, but between the trees and the smog it wasn’t worth it…  Here’s what it would have looked like if I could have gotten the shot:

Nothing To Do With Running (This Is Where I Live…)

Here are a couple of videos of Vancouver so you can see what it’s like where I live. Enjoy!

The first is a time-lapse of the Winter Olympics this past February. It’s not that busy here all the time!

The second is by the same people and I just think it’s pretty cool. The fog was a totally random weather occurrence – at least it was beautiful from up above… We were all living in pea soup at ground level!