1.  I’m still holding out hope for good weather on Sunday.  They’re saying it will be sunny and 14C/57F.  I’m a little anxious about the rain forecast for Monday and that it might decide to show up a day early.  Fingers crossed!

2.  As much as I love a good wedding I, on Colin’s wise recommendation, will not be staying up to see “Wills and Kate” get married.  Something about getting a good night’s rest before the marathon and all that.  But I really should.  I stayed up with my mum to see Charles marry Diana in 1981.  Granted, I was 16 months old and don’t remember it, but it’s kind of a tradition…

I’ll watch the ceremony on replay.  I can do with out the “insightful” commentary from the likes of  TLC, etc.  Thankfully we have access to the BBC – it seems more official in a British accent anyways.  Like what matters in all weddings all I want to see is her dress and maybe the flowers (phbpht, love and commitment).  Can’t say that I’ll be buying the official coin releases from the Canadian Mint (remember we’re still a Commonwealth country), especially since the 2 together would cost $130!

3.  The Canucks squeaked into the second round on Tuesday with a 2-1 OT win against the Chicago Blackhawks!

Nothing of much consequence has been going on here lately so today you only get one thing:

The Environment Canada weather person is a total liar!  A couple of days ago we were supposed to have a lovely sunny Sunday for our long run, but as of today the next week looks like this: 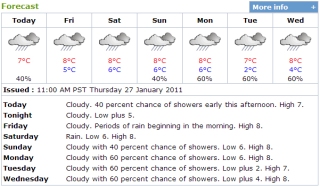 Now I know that this is glorious weather compared to so many of you.  And I am definitely thankful that we don’t have freezing temperatures or ice and snow.  However, it is like this here ALL THE TIME!  Would one measly nice day be too much to ask for?

Where’d This Come From?

Okay, I know a lot of you have to run in weather far worse than we’re experiencing right now, but what the heck? Out here we are used to RAIN! We don’t do cold. The whole city has a conniption when it snows more than 1cm. I know I should just bundle up, but when the wind-chill is -17C and there are gusts of 40km/hr I just can’t get myself out the door. Never mind that I also have to bundle up a 3 year old… We’ve been staying in this week. On the plus side, I’m going out for a run with a friend tomorrow night and there’s a small hope that we might get a white Christmas this year!