It’s amazing what a little investigating will get you.  I was bored looking at Warrior Dash results so I found the youngest female finisher in the results (14) and looked up her pictures.  What did I find, but my husband falling out of the mud pit! 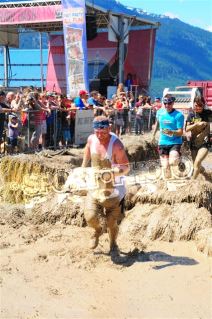 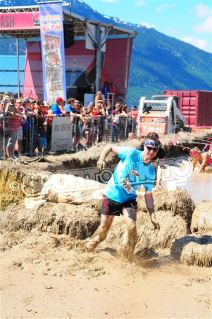 Wordless Wednesday: Tipsy and Dirte Do The Dash 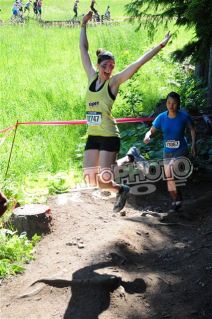 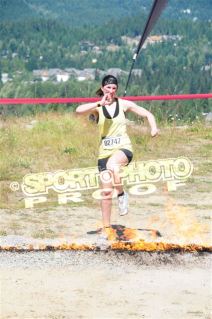 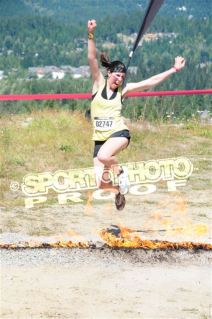 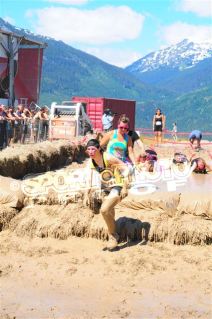 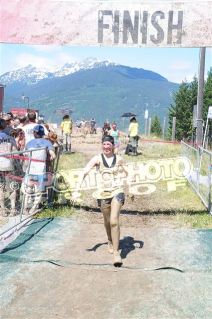 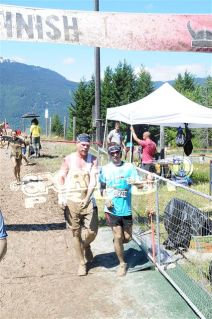 This is originally from whistlerisawesome.com and I am blatantly stealing it!

The night before Whistler’s first Warrior Dash I felt energized.  I prepared for the task at hand by aimlessly driving around looking for cheap overnight parking and getting drunk with friends until 3am.
It was important to grab old runners and remember to pack my sunscreen before the big day, August 6. After I completed my preparations, I fell into bed and slept like the dead.  I was ready for action.
Saturday morning dawned bright and early – too early.   First I ate my oatmeal and moved the car to the free lot. Then it was off to the race.
When I got there I saw my friends Dirte, Rockstar, Shagger, Hanky, Panky, Sparkling, Awesome, Achy, Muddy Terror, Crampy, Sassy, Allstar, Special-T, Gina, Ruby, Dan, Bill, Dave and Christine.  I was glad I was wearing my Tipsy t-shirt. After I saw what they were wearing I knew I was going to need all the new costumes I could get.
We all gathered at the starting line and I noticed the host of the local morning news. Oh yes, this was going to be interesting. And then we were off!
Everyone around me was cheering for the winner of the first wave and gawking at the hill. I decided the only thing I could do was try not to pee myself.
When I came to the first obstacle I thought I was going to do okay.  It was so the right height.  Finishing that section was a relief but then I saw the bruise I gave myself.
I decided to try not to roll down the hill before I tackled this next obstacle.  The dark tunnel loomed large and in charge but I knew I just had to avoid crawling over another warrior.  That was tough but the hardest part of the race, by far, was the Hill of Character!
The best part of the race was when I was running downhill!
Finally, it was all over and I could see the finish line.  I whooped “I’m bleeding!” with mild bewilderment. I survived the Warrior Dash! And now, it was time to get my medal and warm fruit, let the mud dry, cheer on my friends and give Colin my free beer.  Off to results tent I skipped!
To anyone who asks, I will tell them the Warrior Dash is a great way to get to know your friends and a reason to party!  And next year I will bring my warrior hill-training for sure!

I Won The Prize…

I can’t wait to do it again next year!  Recap coming soon…
*in our group, that is.  Really glad I made it up the 21% grade 1km hill at the start and didn’t roll an ankle on the way down…

Just a quick post before Colin and I (and 16 of our running friends) are off to Whistler, BC, for Warrior Dash!  2 nights of being adults as my parents are watching Spud.  There will definitely be a trip made to the liquor store before we head out of town… I’m sure it will be a gong show a fun time will be had by all.  There should be some awesome, and hopefully not too incriminating, pictures to post next week.

Hope you have a great weekend too!

» First off, go over to Sweat Once A Day and congratulate my HTC van-mate Emily on becoming an Ironman yesterday!  She finished in 13:53:44.  Yup, that’s hours.  And while all athletics are totally relative to the athlete, here’s a comparison: she swam 2.4 miles, biked 112 miles and still managed to finish the full marathon (26.2 miles) a good 20 minutes faster than I’ve ever run one.  Of course, she trained her ass off for this!

» Only one more weekend of work before I finally have a weekend off!  Of course it’s a holiday weekend (BC Day) so I’ll be there 3 days, but, as always, the money’s good so I don’t say no…  And the reason I’m so excited to have the time off – besides the fact that I’ve worked every weekend in July – is that it’s Warrior Dash in Whistler!  Time to spend with Colin and 14 friends that is kid free, I can drink as much as I like because I can be slightly irresponsible (but, let’s face it, I only drink about 2 glasses of anything before I’m ready to sleep or I totally shut up because I’m cognizant of the fact that I’m drinking too much), and I can run a “race”.

» Colin has finally heeded my advice and agreed to stop running at a local park.  He’s been doing his long runs out on dyke trails that go around blueberry fields.  Having grown up in the area he knows that’s where the bears like to hang out.  I always ask him to avoid it since I’d like him to make it home in one piece.  Sunday was the day he decided to stop.  Now, it’s not because he was bothered by seeing 6 bears.  It’s because it’s too much of a time waster to have to stop, back up, avoid, wait, etc.  Glad his safety is his main concern…

» I’ve come to the conclusion that I’m going to have to choose between running and sleep.  I’ve found that I just have no motivation to get out the door with Spud in the stroller and it’s killing my training.  I’m going to be making the move to early morning runs.  I’m still working out details, but at least one friend answered my Facebook plea to join me at an ungodly hour of the morning.  Well, it is for me.  It’ll probably still only be 6am, but that’s ridiculous for a girl who loves her sleep.

Yes it’s late in the day, but I need to get this out of my head before bedtime…  Ah, the bullet point.  It makes posts so much easier!