What Are You Doing On 3 June?

If you’re in Vancouver come out for an affordable race at Jericho Beach.  If you can’t make it here please join us by participating in their inaugural Virtual Run.  Register to run 5 or 10 kilometres between 1 June and 4 June.

If you can’t run with us in June click here to contribute your mileage to see if we can run across the planet!  You can add your location or just your distances.  The goal is to turn the earth green!

I have a terrible time committing to races.  Generally I don’t race a lot because they’re pretty expensive around here.  As much as I’d love to do a 5k event every weekend I’m not willing to fork over $25 for the pleasure of being out for less than an hour.  So you would think that I’d be better at committing to a virtual race.  Yeah, not so.  Mainly because I haven’t got a monetary loss to think about.

Gotta say that I am a terrible race participant.  Here are the reasons I didn’t run on the day of the race:

So I ran on Sunday after work.  Now, I did not race myself for 5km.  I could have.  But I had a 7km long run scheduled and I knew I was going to run longer than that.  All in all I did about 11km.  Not sure, though, because my GPS battery crapped out at 8-ish.  I turned it back on and it promptly told me I’d gone a kilometre in 3:41.

I’ve counted my first 5km from Sunday’s run as my official race time.  Given that it was part of a long run, I take a planned 1 minute walk break for every 20 minutes of running, and I had a whole bunch of traffic lights to contend with, I’m pretty happy with my performance.

But before I get to that there’s great news!  After groveling begging and pleading inquiring nicely Courtney at Run, Courtney, Run has featured me as her “Runner Of The Week”!  Yay Me! 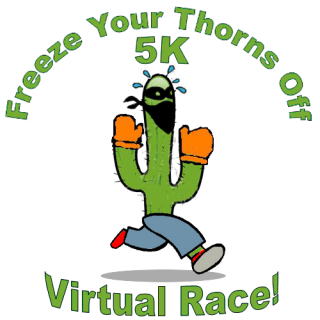 Now, back to my first experience being a race bandit.*  Adam, over at I am Boring/The Boring Runner, hosted the Freeze Your Thorns Off 5K Virtual Race this weekend.  The goal was to run 5 kilometres.  That was pretty much it.  If I had been living in Arizona I could have gone for a run with a group of people, but I don’t, so I didn’t…  I meant to sign up (really I did), but I usually work on Saturdays and figured that it wouldn’t work out.  I found out that I was scheduled to work on Sunday instead yet I still didn’t sign up.  My excuse is that I was too lazy to let Adam know it must have sold out.

The Report (such as it is):

Where:  Suburban boonies.
Route:  The figure-8 up the river, past the rec centre, up the big hill (Colin pushed the stroller, I walked – much needed hill repeats start in 4 weeks!), along some busy roads, back to the river and home.
Virtual Distance/Time:  5km in 40:46.  That’s taking the first 5km since it’s a better result that the last 5.
Actual Distance/Time:  13km in 1:53:24.

I told Colin to remind me to bring the camera so I had proof of running, but that didn’t pan out.  I barely got out the door due to my cold, we left later than we should have, and well, we have a 3 year old.  The camera was on the bottom of my list and I’m pretty sure Colin had forgotten altogether.  Here is my feeble artist’s rendering of our run. 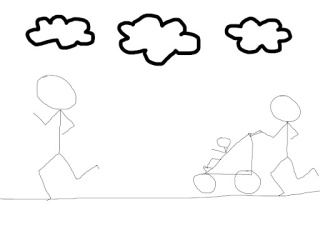 This was a very slow run (see reason for forgetting camera).  The best thing I can say about it was that we completed it.  However, I have to say Thank You to Adam because I don’t think I would have even left the house if I had not wanted to bandit his race!

*I have to state here that I don’t think I’d ever actually bandit a race (not pay, but run anyways).  It would seem far too much like stealing to me and I’d feel guilty if I had to look at a medal knowing that I didn’t really earn it.