When I received my Endorphin Warrior Training Bracelet in the mail a few weeks ago I was excited.  They had extended the offer to do a contest via Twitter and I was happy to be on board.  I have a bracelet like the one above that says FOCUS from Hood to Coast in 2011.  It was my go-to word that year as I tend to wander mentally during races.  The only issue with it is that it’s a bit too small so I can’t wear it all the time.  My request for a new one (with a new word, of course) was received well so I chose BELIEVE.  I have a bit of a hard time with that during some of my runs and can succumb to negative self-doubt more often than I like.

It’s honestly hard to review a fairly simple piece of jewelry – I’ll admit that I was putting off the post since I had so little to write – so I’ve been wearing it lately in hopes of having more, besides “I will believe in myself on race day”, to say.  Last week gave me too much to say.

Life stress had me looking down at my wrist more often than not; I need to believe that certain things are changing for the best.  And then Boston happened.  I was at work when Colin phoned to ask if I’d heard.  Working in retail, where I don’t see much of the outside world for 8 hours, I had not.  After I had, though, I was on Twitter (regardless of cell phone use rules) trying to learn about all the people I’ve met in real life and online because of running.  I was mentally checking off their names while also trying to learn as much about the situation as possible.  It was frustrating and worrying.  I wanted a hug.

As corny as it sounds, having a simple word BELIEVE to look at helped.

Believe people I know are okay.

Believe things I can’t control are taken care of.

Believe that those responsible will be found.

Because if I couldn’t do that I would have freaked out.

So, as simple as a piece of leather and a bit of metal are, my bracelet helped.

You could win your own Training Bracelet courtesy of Endorphin Warrior.  Simply head on over to endorphinwarrior.com, look around, and let me know via a comment what bracelet you would want to wear and why.

Note: I was given my bracelet from Endorphin Warrior free of charge in return for this review/giveaway.  All opinions are my own. 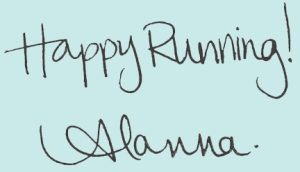 →  Congratulations to all my friends (in real life and online) who completed the Boston Marathon today!  I hope all of you had an amazing experience whether it was the race of your dreams or not.  I can’t wait to hear all about it!

→  I ran my last long-ish run on Sunday (23km/14mi).  Thankfully the weather was great – sun, cloud, and a little bit of wind.  I didn’t have any fueling issues so I’m pretty confident for race day.  I felt a little sluggish, but I’m thinking that it was due to running on pea gravel for quite a bit of the run and my legs weren’t used to it.

→  It’s TAPER TIME!!!  Less than 2 weeks to go to race day.  I’m thankful that I’ve been through this before and understand that Taper Madness is a real affliction.  I’ve already started to have crazy dreams.  The one last night had me running the first half of my marathon on a treadmill (I’ve never run on one at all…).  Then the next day I had to run the remainder of the race, but there was something to do with trains, a shopping centre downtown, and multiple running friends.  I kind of wish I could remember it accurately.  I’m sure that the paranoia of becoming sick will kick in soon as well.

→  I missed my blogging anniversary (blogiversary?) a couple of days ago.  As of 15 April it’s been a year since I started rambling on here.  Thanks to everyone who stops by (more than once!) and takes the time to read and comment on things that I’m not sure have much value.  I know how much other people’s blogs have helped me out and inspired me and if I’ve done that for even one of you that’s awesome!  I’d love to promise some sort of giveaway to celebrate, but you shouldn’t hold your breath…  Eventually I’ll save enough pennies to do something HUGE.  You’ll just have to stop by once in a while to see if it ever happens. ☺