Real Runners Do It In Compression Socks

This past Sunday marked our last LONG, long runs and Colin’s first “run-in” with a bear. Scroll down to see my short blurb about his run – he’s complaining that he’s getting short shrift, but it’s my blog. 🙂

At 32km my run wasn’t as intimidating as the first time I did that distance, but I was still a little apprehensive about it. We had planned to meet at the store at 7:30 to carpool over to the new UBC Running Room in Vancouver as they were hosting a group run.

Problem #1: No one, and I mean no one, that I usually run with was able to make it. A bit of a surprise really. No biggie, though, I figured I’d find a bunch of people to run with once we got there.

Problem #2: Another store had also decided to host a group run so there were only a couple of stores present. The other store that made it out to UBC had planned their own run out to Richmond while we were doing the downtown tour.

Problem #3: When those of us going downtown sorted ourselves out there was no 4:15 pace group like I’d hoped. There was me, Mary from Vancouver, and Christine from Surrey. Awesome! Mary wasn’t training for a marathon and only wanted to do half the distance. Christine wanted to do the full 32km, but was on her own too having only found out about the run from staff at the Richmond store a couple of days before.

So started my last long run before taper. Apparently the 23km next week doesn’t qualify as long (?), but I digress.

We started the run with a few kilometres of trails. Since Mary was a local (re: not from the ‘burbs) she convinced us that we should stay on the trail that paralleled the road rather than go down to the beach. It was really nice, but, man, it was hilly! She’d say, “oh, it’s just a little up hill here” and then we’d find ourselves going up a super steep slope. But it was worth it. Especially since I skipped out on my final hill repeats a few weeks back.

When we got out to the beach we made a quick pit-stop at the concession – it’s great to run with women who’ve had kids… and then were on our way. The run took us along part of the route of my last half marathon which was nice since I knew where we were going. Mary decided to turn around just before the Burrard Bridge and head back, but we carried on. It didn’t kill me this time like it did in the half, but I’m pretty sure that’s because we were at kilometre 12 not 18 and I wasn’t racing.

After the bridge we headed down to the seawall and it was a great to be running relatively flat. There was lots to look at too. The local Aids Walk was on as well as the Terry Fox Run. I have to admit that the tents at both with signs for pancake breakfasts and snacks were very tempting! Christine and I made another pit-stop at Lost Lagoon in Stanley Park and then went the wrong way. We weren’t lost by any means, but skipped a chunk of the seawall that we were supposed to do. I’m pretty sure we didn’t lose any distance here and we at least missed a long light at a major intersection.

Once out of Stanley Park we were on the way “back”. We still had 14km to go (so we thought, more on that later) as we headed along Denman. We’d been running for a while – I think it was around 11 – and, if you know Vancouver, you know that Denman is full of restaurants. I think the worst was that we passed a Mongolian grill place that had just heated up their grill. It smelled so good! My stomach liked my GU’s, but definitely thought that real food sounded better. We hit the seawall again and crossed under the Burrard and Granville Bridges. We were both getting a bit convinced at this point that our run was going to be over 32km. We couldn’t reconcile what we were supposed to have left with where we were. However, we thought we might be mistaken and carried on – because, really, at this point we couldn’t do much else.

We went over our second bridge of the day (Cambie) and it started to rain a little. Thankfully by the time we went four blocks it was gone; Vancouver had missed most of the forecast thunderstorms. I think that I really would have preferred the rain to what was to come – hills. Every street seemed to be a long gradual hill. We were at the 24km mark and Christine’s IT band and my feet were starting to feel it. Each time we stopped (we were doing 10 + 1s) Christine had a hard time starting again. We slowed down a little, but I don’t think that really helped all that much. My feet were feeling it because my shoes are toast. They started squeaking and the padding in the forefoot was pretty flat. We made another stop at the Broadway Running Room to fill up our water and just rest.

Back on the road feeling a bit better we set off into residential areas. This isn’t a run down part of town! Lovely houses, many of them restored, and quiet streets. The sun was shining and we were plodding along quite nicely. Thankfully there was yet another Running Room to visit (a necessity for me) at Alma. Once we finished there we were almost done! We were at 29km at this point and knew we’d be running long. There was no way that we were going to be finished in 3km. Unfortunately the one thing I’d forgotten about the run was the hill we’d have to go up. It was one of those hills that just kept going and going. And when I thought it was done it split at an intersection and started again. I just checked – it was 1.11km long. Really? At the end of a run? Thanks.

At this point I was close to done. Not only in reality, but physically and mentally. My feet hurt (thankfully not my knees) and I knew that I’d be going over 32km. This would be my (and Christine’s) farthest run ever. Since our program doesn’t call for anything over 32km I have to admit that I’ve always been nervous about race day. I was convinced that I’d suck for the last 10km and was really doubting my ability. So I’m very glad that we had to do 2 extra kilometres. That’s right, I ran 34km/21miles. It wasn’t easy and there’s no way that I would have been able to run another 8km on Sunday, but I’m not so freaked out now.

We ran in to the Running Room after 4 hours and 11 minutes. I was so happy to be done. There were still some of the promised bagels (which I forced myself to choke down) and Allison from our group had brought banana-chocolate chip muffins (which I could have eaten far more than the one I had). It was actually a great run. I had good company, the weather was decent, and my confidence level went up! Now it’s time to taper! 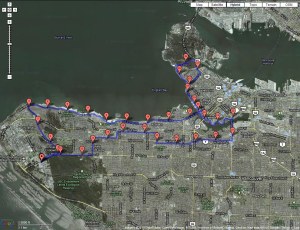 So that’s my run, but I wasn’t the only one in the house running on Sunday. Colin decided that he’d try for a +20km run too. He’s been having some IT/knee issues and was feeling better all last week. My parents came by in the morning to watch M and let Colin head out in our neck of the woods. Thankfully he hadn’t left about 15 minutes earlier or he would have been caught in a cloud burst. As it was, there was already a thunderstorm warning in effect for the lower mainland. It probably wasn’t the best idea for him to be running out on the dikes, but he wanted the softer surface of the trail.

As his route was a familiar one there wasn’t much excitement to be had. He got rained on for a bit of the run – he and another runner gave each other sympathetic/”aren’t we crazy?” looks – and then he found a friend. Click on the map below! There are a lot of blueberry fields in our area and the bears are looking to get full before the winter. Apparently the one he saw was just meandering down the path, taking his time and hadn’t seen or smelled him. Now, I know that I’d be freaked out by a bear. I would probably turn around and just revise my route. Colin? Not so much. He waited for a while until the bear made it’s way into the ditch/fields and was a safe distance away before carrying on. I just know that Colin’s biggest regret was not having his fancy camera with him to take pictures!

The best part of Colin’s run (for me anyways) is that he ran 32km! I was so shocked when I called and he told me that. I really wasn’t expecting him to go for it, but he said that he felt good and kept on running. Compared to a few weeks ago that is huge progress and a major confidence boost since there was a point when we weren’t sure if he’d even be able to run the marathon.

This entry was posted on September 21, 2010 by lovemyrunners. It was filed under 32km, bear, gu, long run, Running Room, Stanley Park .