After dropping M off at his aunt and uncle’s for a sleepover (thank you!) Colin and I went home with every intention of going to bed early after we packed up our race gear. Totally didn’t happen. There was always just one more thing to do: hunt and gather laundry for post-race, tie on chip timer, re-tie chip timer two or three more times to get it just right, add music to iPod/figure out playlist, etc… It must have been force of habit, along with having a kid-free house that kept us up until 11pm. So when the alarm went off at 4:30am the best we could do was roll ourselves out of bed and blearily get dressed and fed.

We met up with our carpool (the wonderful Herb, who drove us even though he was injured and no longer running, Allison and Laurie) at our local running store at 5:30am. It was about a 45 minute drive out to the race course and we had our fingers crossed that the rain shower we passed through would turn back to drizzle. We got a fairly close parking spot on the street and got our stuff together. We all look cheerful, but that was more race-day anticipation than anything… it was cold. As we were heading to the starting area we met up with James and his wife and commiserated about the weather – and, yes, James, I did say that my legs looked like plucked chickens (I had a severe case of goose-bumps)! 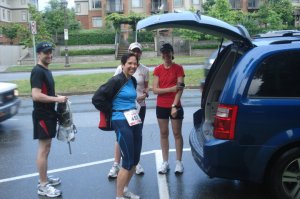 Colin, Laurie, Allison, and Me getting ready. 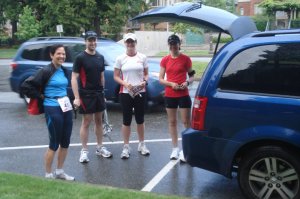 Now you can see us all!

Once we were on the race site we decided that it would be best to check out the porta-potties. Thankfully there were lots, but, as is usually the case, the lines were ridiculous. They were set up in a triangle so all of the lines were getting crossed. We didn’t have to wait long, but there wasn’t much order.

A nice group shot after our bathroom break… see how much happier we are!
Colin and I decided to go for a bit of a warm-up jog and stretch at this point. We didn’t go very far, but it was nice to get moving and calm my nerves a little. At about 10 minutes prior to start they announced that the corrals were “self-seeding”. I was a little confused since I had been assigned a start group – it said so on my bib. Essentially it meant that you could start where ever you pleased. I stuck to the middle of the pack since I’m neither fast nor slow, but I’m sure there were people in totally the wrong spots. Colin and I shuffled around a bit trying to get our GPS units to “find satellites” and then the race started.
And that’s when I noticed that my HRM didn’t display the right screen! Aarrgghh!!! It had been fidgety on my last run and I didn’t think that it had carried over, but it had and that meant that I only had my heart rate and time. NO PACE! Thankfully it was programmed to beep at 1km intervals, but I’d have to base my pace on that. Since I couldn’t stop to fiddle with it I kissed Colin goodbye, wished him well and sent him on his way.
I tried not to get caught up in the quickness of the pack. I have a pace that I know I keep relatively well (6:18/km) so I made sure I was going a little faster than was usually comfortable. The first kilometre and a half were good and then I started to feel my left sock. I don’t know if it was because these socks are getting old or what, but it had slipped down on the inside of my heel. It was totally bothering me and I didn’t want it to actually come off so I had to make my way over to the side, stop and pull it up – frustrating! Getting back into the race was fine (lots of shoulder-checking involved) and it was nice to see Herb at the 3km marker. I saw him first so I yelled out to him and he took this awesome picture: 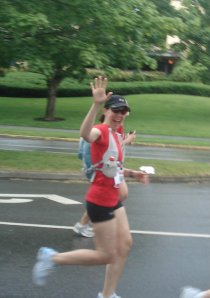 See how relaxed I am early on…
The next couple of kilometres were pretty average. A bit of a downhill then a straight out and back (on the other side of the median). I saw Colin when I was at about 4-1/2km – he was on the other side heading back already – so I yelled at him and generally made a spectacle of myself. Since I knew that I wouldn’t see him again until the finish I felt it was my wifely duty!
I was keeping pretty good pace and making sure that I was fueling/hydrating well. Even though I didn’t use the water stations (I had my pack) they looked like they were well manned – there were lots of volunteers. At about 9km I got to the main downhill (+/- 75 metre elevation drop) and tried not to put on the brakes too much. I didn’t go all out, but felt like I made up a little bit of time. I hit 10 km (by my watch) in almost exactly 1 hour. After the hill it was a nice run alongside the beaches – I ran with Darren, my half clinic instructor, for awhile. Normally he’d have been long-gone, but he ran the BMO Vancouver Marathon in May and was taking it a little easier for this race. At about kilometre 13 he went on ahead and I slowed down for the uphill.
This is when my race started getting a little sucky. Murphy’s Law states that “if anything can go wrong, it will”. And it did. Suffice it to say that GI issues hit with a vengeance (any other mention is TMI). I thought that I was in luck – I was sure that porta-potties were just around the corner at kilometre 14. After all, that’s what the website had said. I had faith that it was true… and all I found was a water station. Crap. I kept my hopes up as I passed into a residential neighbourhood. Kilometre 15 – no luck. I passed some lovely volunteers who actually took the time to read my name and cheer just for me. I tried really hard to appreciate their effort! Kilometre 16 came and went with nary a little grey box in sight. I passed a little park with lovely water views and *gasp* A TOILET! Hooray! Or not. It was locked (I assume since it was city, not race, supplied). I was having no luck. At the 17km water station I finally found the bathroom. And promptly wasted 3 valuable minutes. But all was good with the world afterwards and I ran along happily until I came upon the Burrard Bridge.
I have driven over this bridge probably thousands of times in my lifetime. I even walked over it a couple of times during the Olympics. However, I have to say that to run over it – on the roadway – is daunting. It doesn’t look that steep. I learned that looks can be deceiving. After running 3/4 of the race on mostly flats or downhills it was a bit of a shock to the system to have to go up again, especially since it was only kilometre 18. I started playing games with myself to get up and over it. I told myself that it was just one hill and I’d done hill repeats so that meant it was nothing. I played “pass the runner” and picked people off just so I could feel good about myself. I let myself get distracted by the cheering spectators (as I should have). Soon I found myself on the home stretch with only 3.1 km left to go.
Once I was on Pacific Boulevard I started to get a little excited. I knew that I still had a ways to go so I couldn’t push too fast. My watch told me that I was on pace to beat 2:10. My original time goal was a realistic 2:15 (only 1:58 faster than my first half in February) so when I saw that I could potentially come in 5 minutes faster I really started to focus. At about 20 km I saw my friend Christine and said hi, but didn’t slow down for long. I could see the 21 km marker and needed to go.
Just as I shouldn’t have believed the website about the porta-potties I also shouldn’t have taken the elevation graph as totally accurate either. It shows a nice decline into the finish after the bridge. However, at about 20-1/2 km the road starts to go up again! Aahh! My legs were burning already and I kept checking my watch for time and I had a small hill thrown at me – not good. I really had to dig down deep to keep my pace. I passed the 21 km flag (silly me, I thought I was done since I forgot the .1 km) and then just booked it. See picture below:

Sprinting to the finish!
Colin told me when he found me after I finished that he called my name and cheered for me, but I was in such a zone that I didn’t hear anything. I have a feeling that my official finish line photo is going to be either really awesome or really scary – I’m voting scary. All I wanted to do was finish. My watch was telling me that I finished in 2:08:49, while clock (official) time was 2:13:07. Chip time turned out to be 2:11:38. Take which ever result that you want: they were all PRs!!! I knocked almost 5-1/2 minutes off of my time in February so I’m super proud of myself. I’m also really proud of Colin. He dropped his time by 12 minutes (1:55:07 in February and 1:43:08 this weekend).
I crossed the finish line, received my medal, found Colin and we met up with Herb again. I went to get some food – banana and a cookie – and then found everyone else.

James, Laurie, Allison, Colin and Me.
After a couple of pictures we made our way to the van and Herb surprised us with champagne for a celebratory toast (which we then turned into mimosas – healthy juice and all that). Allison, Colin and I all PR’d at this race! It was great to be able to share the experience with Colin as well as new friends – they are all from my marathon clinic. 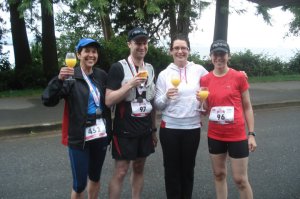 Laurie, Colin, Allison and Me.

Herb, Colin, Allison and Me.

It was pretty much the perfect day (minus the issues listed above). The weather was just right, the course was beautiful, I had fun with friends and I got a PR. As we drove away from Stanley Park to find breakfast Herb put on Queen’s “We are the Champions”… it can’t get much better than that!
Advertisement

This entry was posted on June 29, 2010 by lovemyrunners. It was filed under PR, race, Scotiabank Vancouver Half Marathon .