I Didn’t Cry and I Didn’t Trip

Training for this year’s Squamish 50 race is in full swing in our household as Colin and I are both signed up to run the 50km.  For the most part we’ve been able to hit the trails on alternating days on the weekends and have been fortunate enough to run with like-minded crazies (Colin’s running partner is training for Ironman Canada!).  However, my luck ran out yesterday and, though not for a lack of trying, I wasn’t able to find anyone to run with.  So I did something I’ve never done: I ran by myself.  On. A. Trail.

Let me preface the rest of this post with the disclaimer that I am a bit of a scaredy cat.  I don’t like things that go bump in the night, scary movies, and/or setting myself up to be scared (see: Fright Nights, etc.).  I like social runs and the warm-fuzzies that go along with them.  This wasn’t really my cup of tea – the one sitting next to me on the desk is – but I put on my big-girl capris and went for a run!

Due to scheduling – Colin running to the top of Grouse from the car dealership and Spud attending a birthday party  – I knew my run wouldn’t be starting until the late afternoon.  It was a bit weird waiting all day to go for a run.  I fueled incredibly well with birthday party snacks like watermelon, banana, and popcorn twists.  On my way out the door I grabbed a Picky Bar for the drive there.  I was probably a little dehydrated, but actually felt okay otherwise.

My run of choice was Buntzen Lake loop via Lakeview trail and I started at 4pm.  I had 2 options planned.  I would either run the east side of the lake out to North Beach and return the same way if I wasn’t feeling brave.  If I was, though, I would go Lakeview.  I started out and promptly messed up my fancy watch (Suunto Ambit 2) that I don’t really know how to use so I had to stop it and begin again.  I think it was only a minute so no big deal…  There were a few people out on the trail still.  The sun had come out and it was warmer than I expected.  The section to North Beach is rolling hills with a couple of small switchbacks and is pretty scenic:

I reached North Beach in half an hour where I decided I didn’t need to pee, laughed (to myself) at the Scout leader trying to talk a group of ~12 year old boys into looking his way for a picture, and crossed the mini suspension bridge since I was apparently being brave and headed to Lakeview:

Lakeview Trail is my favourite of the Buntzen trails that I’ve run.  It’s just the right amount of difficult for me.  The lower loop is too flat and gravelly and, while Diez Vistas is an amazing workout, I just don’t love it despite the specatular – on a good day – views.  Lakeview I could run all day.  I don’t know if everyone runs the lake counter-clockwise, but I like the warm up the run out to North Beach gives me.  It usually takes ~30min/~5km for me to get into any run so that fits the bill.

If you’ve run Lakeview this way you’ll know that there is a little steep hill that cuts up to a trailhead.  This hill is my nemesis.  In the 2 years I’ve been running Buntzen I’ve never reached the top actually running.  Usually I’ll stop somewhere, complain about it, and hike the rest.  It’s been my goal to beat it for a while.  And yesterday I did!

I’m not sure why (repressed memories, maybe?), but I always forget how many switchbacks there are to get up to where Lakeview is runnable.  I’m not a great climber so half the reason I wanted to do this trail was to practice.  I knew that I would be able to power hike better, and likely faster, than running so that’s what I focused on.  Thankfully the hard work at my bootcamp class is paying off because I definitely felt stronger!  Still slow, but stronger…  I think it took about 15min to get to some sort of level rather than just up.  It was quite shady in the forest, but not at all dark (although I did bring my headlamp just in case of an emergency). 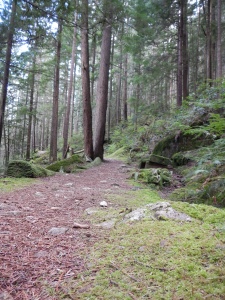 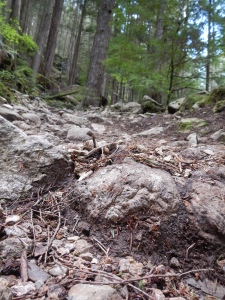 Once the trail stopped climbing I had a good time.  It’s rolling and technical enough that I couldn’t zone out unless I wanted to bail.  I didn’t see a single person on the entirety of Lakeview and that was okay.  I only had the crap scared out of me once – I may or may not have jumped, but I do know my heart rate spiked! – by fallen tree roots that tricked me into thinking they were a bear foraging in the ferns.  I didn’t go back and take a picture, but the trees were silhouetted like this: 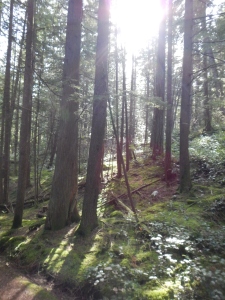 Close to the point of descent there is a little waterfall so I, of course, stopped to take a picture and a selfie:

By now I was pretty much ready to be done.  I had to make my way down the hill and back over to the lots.  Unfortunately I had 2hrs on the schedule and I was stubborn enough to want to make it at least to that.  I had about 15min to go by the time I reached the parking lots so started running in circles to make it up.  Please tell me I’m not the only one whose maps look like this:

I ended my run with 2hrs, 12km, and 424m/1391ft of ascent in the books.  Pretty happy overall with how my first ever solo trail run went.  Can’t say I want to do them all that often, but I did gain some much needed confidence.  Ended the day with a couple of selfies and headed home… 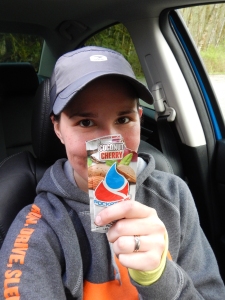 See you on the trails!

This entry was posted on April 27, 2014 by lovemyrunners. It was filed under Uncategorized .