The Half Corked Marathon in Oliver, British Columbia, Canada is not as it seems.  It is not a marathon.  It isn’t even a half marathon.  However, it is 18-ish kilometres that’s run through vineyards and wineries and filled with a lot of wine.  It’s also a really good time!

Colin and I heard about the race last year through friends of ours who had participated.  Seeing as we were just getting “into” wine – Colin’s parents moved into those parts and wineries are something fun to go to while we are up there – we didn’t sign up.  This year, though, we were on the ball!  We made sure we signed up to know when the registration date would be.  We made sure that one of us (Colin – I was at run clinic prior to dropping out) was home at the odd opening hour of 7pm on a Tuesday.  And we breathed a sigh of relief when we confirmed that we’d be 2 of the 600-some-odd runners/walkers.  I say it was a relief to get in because it sold out in 3 minutes!

At the end of May we packed up our bags and headed to my in-laws.  Conveniently it was my mother-in-law’s birthday the day before the race so we got to give her the “gift” of spending time with Spud the day after…  We had anticipated making a sneaky escape from the house race morning, but Spud had other plans.  He refused to go to sleep the night before unless we promised to wake him up before we left.  Of course, he was sound asleep come morning, but we knew he’d be upset if we didn’t keep our word so we got him up, settled him on the couch with cartoons (because the grandparents weren’t up yet – it was 6:20am), and said goodbye.

It was about an hour’s drive to the race and we thought we’d see a ton of wildlife on our way because it was so early, but we were disappointed.  After seeing 3 bears, a couple of deer, and a kamikaze mouse who almost bit the dust under our front tire on the way up, all we saw was a marmot sunning him/herself on the side of the road.  So, a pretty uneventful drive.

In order to get to the race start we had to board school buses and be driven about 15 minutes to the start, at Hester Creek and Gehringer Brothers (they shared a driveway).  It was quite comical to ride in a bus full of costumed adults (yes, it’s definitely that type of race!) who obviously hadn’t been on a bus in a very long time.  There was a lot of shrieking from the back when we went over bumps!

Colin and I signed up for the first of three waves, mainly to beat the heat in the early afternoon.  Temperatures that day ranged from 17C/63F at 9am to close to 27C/81F by 1pm so we really wanted to get done as early as possible.  Of course, that’s relative since we finished in just over 3 hours…  We hung out at the start and critiqued the costumes – Colin was “a runner” and I was “a runner in a sparkly skirt”.  The race started fairly on time (not that it really mattered) and we ran down the drive and onto a dirt/sand path.  Thankfully I didn’t get a shoe full of sand at any point!  I had dusty feet, but nothing blister-inducing.   Colin and I decided to run together at this race since it was just for fun.  In the 3 years we’ve been running it is the very first time we have run a race together.  And, quite honestly, probably the last until next year! 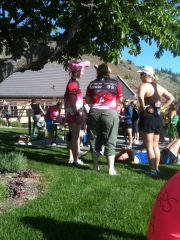 Our first winery with a wine/water stop (no wine at/drunks before the start) was Inniskillin.  This was fun for a bunch of reasons:

Next up was Road 13.  The good part was that we got to try their Rosé wine.  The bad part was that we had to run up a hill to get it.  I walked.  Colin ran.  After that quick jaunt it was back down the hill and over to the next winery (sense a pattern here?).

Rustico Farm & Cellars was pretty fun.  After being greeted by 2 cowboys (who apparently wrangle grapes, not livestock) it was another hill.  I forced myself to run up this one just to get a hill repeat out of it (I’m training for Ragnar…).  The guy in the “Running Sucks” t-shirt gave me a good laugh.  At the top I got a sheriff badge button that would give me a discount later in the day – good marketing, that!  Had the requisite white, red, and water.  Also had the added bonus of cocktail weenies.  It’s amazing what you’ll eat on the run when finishing is the ultimate goal.

After Rustico we crossed the highway (thank goodness for traffic controllers – stop & go people – so we didn’t get smucked) and had a bit of a run til the next break.  It was along a shaded path and across the Okanagan River.  You can’t really see it in the left sign, but it says “The Drowning Machine” in reference to the weir.

Church & State was our 4th winery of the day.  It was a little bit of a climb up to it, but well worth it.  Another of our favourites.  Colin commented that he was looking for the fullest cup so the girl brought over the bottle and gave him a good half cup (think red plastic cup size…).  Goofed off a little, was thankful for the port-a-potties at each stop, and headed on. 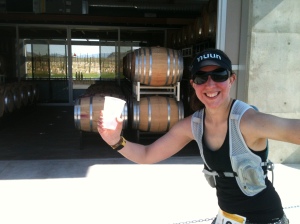 I started to feel pretty tired at this point.  I am still breaking in my Saucony Mirage’s (they’re a 4mm drop if you’re a #runnerd) and this was my longest run to date in them.  When I stopped to walk on a very tiny incline Colin asked if I was doing okay.  I replied that I was “lazy”.  And then got an earful.  So I revised it to “my legs are fatigued…”  Back down the hill we went and along the river for a good while.  The shade was very welcome!

Silver Sage was probably my favourite stop on the route.  They had quite a few wines to choose from and it was really shady.  It was quite a busy stop!  They also had a lot of food – mini quiche, fruit, freezies, crackers, etc – which was greatly appreciated.  We were hungry by then!

After Silver Sage it was up to Stoneboat (another walking hill…) and their citrus granita.

We may or may not have had multiple servings of that!  Their part of the course was really nice since we got to run through the vineyard.  I made Colin take pictures of me for my blog – here’s my favourite:

Oliver Twist was awesome too.  Mainly because they had grapes in their wine and apple fritters to eat.  I definitely shouldn’t have had 3 pieces since I cramped up not long after, but it seemed worth it at the time! 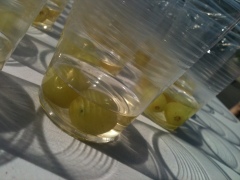 The stretch after Oliver Twist was a little rough.  Not only did I have a food rock in my stomach, but I realized that I’d neglected to drink water at the last 2 wineries.  Oops!  Good thing refreshments were close at hand (unfortunately, though, coming right before a monster hill).  We were treated to Sangria and cucumber gazpacho by Tinhorn.  Again, not runner fare usually, but so welcome.  I made sure to drink plenty of water as well.  We ran a little bit more together until Colin told me he had itchy legs.  I guess that’s what happens when you run slower than usual.  Not that I’d know.  So he took off and horrified all the people who elected to walk up the hill.

We met up again at Desert Hills.  I had something white (Viognier? Gewurztraminer? Chardonnay? Don’t know.) and a lot more water.  Colin stayed with me this time, but we got passed by a couple dressed as a hot air balloon and anchor.  Only slightly embarrassing, but more so for Colin than me.

It was a pleasant surprise to find Nk’Mip (in-ka-meep; no, I had no idea the first time either) at the top of the hill with ice cold Reisling!

After that we only had one more stop at Quinta Ferreira before the finish.  They were at the bottom of a hill because I felt speedy running down to them!

It was nice to get back down into Oliver and know the finish line was near!  I didn’t make Colin cross the line holding hands (I should have) and we finished in just over 3 hours.  Honestly it was the slowest, most relaxed, fun race we’ve done.  After finishing we got commemorative wine glasses instead of medals (we also got a bottle of wine with each of our race packages) – with drink tickets for more tastings from wineries not on the route – and a decent bag lunch of a sandwich, salad, fruit, and dessert.  We met up with our friend Laurie to eat and to catch up.  Since it was getting pretty hot we headed our separate ways.

We got changed and hit up a few more wineries on the way home.

This entry was posted on June 4, 2012 by lovemyrunners. It was filed under Half Corked Marathon, race, race report, recap .