Greetings from the land of rain.  To quote How I Met Your Mother right off the bat, “You know what they call this in the ‘couve? Barbecue weather.”*  Autumn has officially arrived in Vancouver.  Well, it showed up a while ago, but it wasn’t big enough news to write an entire post about.  To be honest, it’s darn near winter.  They’ve closed the ever popular Grouse Grind which is apparently fun, but climbing 2800ft just for the heck of it still intimidates me!  And they’ve opened at least one of the local mountains for skiing/riding.

I haven’t been blogging lately and it’s been kind of nice.  What kind of crappy blogger does that make me?!?  I’ve been reading blogs and commenting, but when you aren’t running it’s hard to come up with things to write about.  And, let’s face it, what runs I were getting in were either so short or so slow they would have been exceedingly boring to read!  Not too much has happened in the last month.  Ran a little, walked a little, worked a little, Spud dressed as Mickey Mouse for Halloween (3rd year, 2nd costume because he outgrew the first one).  That said, if you’ve been stalking my blog – coughmumcough – you’ll notice that the only updating has been to my mileage.  As of today I have run 936.38km/581.84mi.  I had higher hopes at the start of the year, but after burn out I’ll take what I end up with!

Speaking of burn out I think/hope/pray that I’m over it.  While I am running I’m not getting out quite as much as I’d like.  Ideally I’d get to 4 days/week.  Right now I’m at 3 so it’s not much to add another day in there.  Having Spud in playschool really helps because I can get a longish run in on one of those days.  I thought I’d see what I had in me the other day so I picked one of the biggest hills to run up and over.  I proved to myself that, yes, I could still do it.  However, my hill training has completely gone to pot.  I wasn’t silly enough to try and run without stopping.  I did intervals.  I’m sure that all the drivers coming down the road (and up for that matter) were wondering why I was choosing to run up it.  At about half way I was wondering the same thing!  At least the downhill was fun.  After 1.7km up getting to run 2km down was lovely.  My shins didn’t quite think so later that day, but it wasn’t raining, the view was great and downhill is what I love running the most.

Fun gear I have bought/won since I’ve been away aka “nothing helps you get back into the swing of things like new running gear”!

CEP Compression Socks:  I won a pink pair on Facebook at the start of October. You can never have too many pairs of compression socks.

Sugoi Midzero Zip:  I had time to kill one morning before work so I was perusing the aisles of Winners (that’s TJMaxx/Marshalls up here).  Usually I laugh at how crappy all of their stuff is – with the exception of their toys/books.  But I started looking in the women’s athletic section and was completely surprised to find a Sugoi top.  And a nice one at that!  So I had Colin stop by the next night after work and pick it up for me.  He had to go back the day after that to get one for my friend so we continue on our tradition of being twins!

There is no reason to ever turn down a deal as good as the one I found: $35 for a shirt that retails for $100.  It reminds me a bit of Grimace from McDonalds, but I’ll just have to come to terms with that.

All joking aside it really is a comfortable shirt.  It’s still a little warm – I was pretty hot in it this morning.  However, I’d much prefer to be too hot in the rain and soaking wet than wear my water resistant shell and have it not breath well enough.

Under Armour Recur Over The Calf Sock:  When I saw these at work I really wanted them!  They’re just this side of obnoxious.  The picture doesn’t really do them justice – they are fluorescent.  I’m not sure if I’ll wear them running (I’d need a new skirt since mine will clash terribly), but they seem like they’d stay up if I were to try. 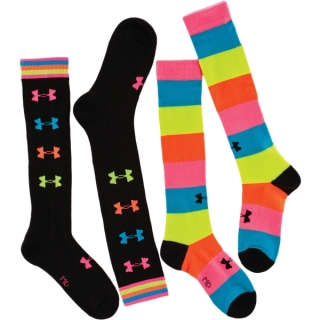 I registered Colin for a race this morning.  It’s the first half marathon in Vancouver (aptly called “The First Half“) in 2012.  I volunteered at it last year and it’s a well run, relatively flat course.  Unfortunately I am going to be signing up for the full marathon clinic and this was sort of Colin’s “fairsies” for that.  It took all of my willpower not to sign up myself at the same time.  Not only is it the first race he’s doing that I haven’t, but a ton of friends are running it too.  Alas it is now sold out so I will be a spectator extraordinaire come February.

Our plan after that race is to continue training for the BMO Vancouver Marathon.  It’s at the start of May so we’ll have plenty of time to prepare.  It’s a brand new route this year and I think it’ll be a nice change from last year.  We’ll register for this one in December since that’s when the price will increase and I really don’t want or need to be hit with an extra $20.

The “Fun Race” of the year will be the Seattle Rock N Roll Half Marathon.  We’ll both be running it.  I’m super excited about it since there will be many bloggers/Hood To Coast friends there.  I’m a little apprehensive about not knowing the route, but I’m sure I can suck up all the hills they’re sure to throw at us for 21.1km/13.1mi.  Thanks to Megan (who’s flying out for the race!  Yay!!!) for reminding me that there’s a $20 discount on Friday to celebrate 11.11.11!

So.  That’s what’s going on here right now.  I can’t guarantee that I’ll write every day, but I don’t think it’ll be as long as this last hiatus/sabbatical/random disappearance.  Hope your running is going well too!  I appreciate you all for sticking around – except for that one person who left a couple of days ago (I understand, though, since I wasn’t here…).

* If you’re from Winnipeg then it’s completely acceptable to say “The Peg”, but no one calls Vancouver “the ‘couve”.  Unless you’re a tool.

This entry was posted on November 8, 2011 by lovemyrunners. It was filed under "First Half" Half Marathon, BMO Vancouver Marathon, Burn out, Seattle Rock N Roll, training .