Lack of imagination, creativity and concentration gets you bullet points once again.  Here are the random thoughts that need to escape from my brain:

Ø Less than 2 weeks until Hood to Coast!  Lots to talk about tomorrow for my Team Nuun Tuesday post, but it’s insane how fast the time’s gone by.

Ø I did my first downhill run on Friday.  Originally I was supposed to run a route with a friend that would have been pretty much identical to HTC, but the timing just didn’t work out and we didn’t want to be running it as it was getting dark.  Between traffic, no sidewalks, and possible animal encounters it was probably for the best.  Instead I did a solo run that, in part, saw me do 5km/3.1mi with a 1000ft elevation loss which is about half of what I’m expecting.  I tried really hard to focus on technique and think I did fairly well.  That said, however, I’m still feeling it now.  The hunt for appropriate ice packs is on!

Ø Colin went out for his usual long run yesterday and remembered something cool about his bear-encounter a couple of weeks prior.  There’s a section that he had to run through where the bears’ route went from tall grass, into a ditch, across the road, and then into the blueberry fields.  When he was running he was actually going through the wet bear footprints!  When I said that’s why we need a little camera to run with he mentioned (wisely) that the last thing he would be doing would be stopping there!

Ø I’ve discovered that waiting for something in the mail is like the old idiom “a watched pot never boils.”  I’m quite certain that what we’re waiting for will arrive when I go out which, of course, means that I can’t pick it up until after 1pm the next day.  It’s driving us nuts!

Ø We’re signing Spud up for playschool this fall!  That means that I’ll get 2 days a week where I can do whatever I please for 2-1/2 hours.  I’m pretty sure I’m going to be the mum that shows up before and after class in her running attire and will have to endure strange looks from other parents.  Maybe I’ll have to make sure that I run at the start and have time to shower before pick up.  I don’t want to be the smelly mum…

Ø Colin and Spud went to the local airshow this past weekend while I was at work.  It’s a family tradition to spend a long, hot day around noisy airplanes and this year’s show didn’t fail.  Not only were there the requisite planes in the air and on display, but there were also booths set up by local companies and law enforcement.  Here’s the reason that prisoners should always be handcuffed: 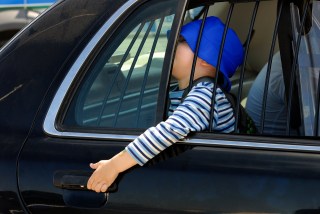 This entry was posted on August 15, 2011 by lovemyrunners. It was filed under Monday Musings .