Why I Love Vancouver

In the wake of all the bad press due to rioters after the Stanley Cup final there actually is good news.  People are advocating posting pictures of rioters and urging people to identify and turn in their friends/co-workers/employees, etc.  There were clean up crews of volunteers who traveled downtown to help get rid of the messes.  Although city crews got most of the garbage there were tons of people out making sure glass was out of sidewalk cracks and graffiti was cleaned off of walls and sculptures. 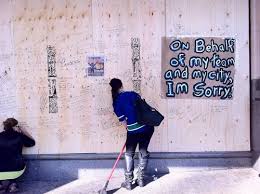 I think the one thing I’m most proud to see is this:

One of my friends was in the first riot squad unit to respond.  Having people recognize that he and his fellow officers put their lives on the line to keep their city safe is awesome (Thanks, Ian!).  Yes, there have been questions as to how the police put their plan in place and lots of “what-if” questions.  That’s inevitable.  The one thing that I haven’t even seen suggested is that the police weren’t doing their job well.  In a day and age where emergency services rarely get their due the fact that people took the time to tell the police thank you makes me so happy.

It’s days like this where I’m so proud to be from Vancouver.

This entry was posted on June 17, 2011 by lovemyrunners. It was filed under Uncategorized .