Before you read my report do you: have a drink? have a snack? need to go to the bathroom?
Make sure you’re prepared before you settle in to read a really long race report! It’s my first marathon; what do you expect?
Our race preparations began on Saturday 9 October early in the morning. My parents were coming to stay with Spudsy at our house. Since we needed to be at the ferry terminal no later than 8:30am for our 9am sailing – always reserve your trip! Being stuck in the line on a holiday weekend is no fun – they were coming over at about 7am. That meant we had to be up by 6am to eat, finish packing the car, and get Spudsy up to say goodbye. Thankfully our departure didn’t mean too many tears, but that could have been because we left
bribes
presents for him to open each day we were gone. Once we were on the road it was a quick 45 minute drive to Tsawwassen to catch the boat. 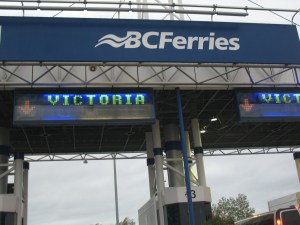 Ferry Terminal – we’re on our way!
It’s amazing how busy travel is on a long weekend. The line up at Starbucks in the terminal was at least 20 people long. Of course we waited, but we were only getting coffee and tea so the wait was okay. I saw a friend from elementary school while in line and had a bit of a chat and then in was time to board. Being that it was (Canadian) Thanksgiving there were too many people with too little seats. We ended up spending 80% of our trip in the car reading those free tourist magazines as we really weren’t willing to sit as singles and it was too cold and windy to be on deck.

View from the parking deck – the trip goes through the Gulf Islands
After about an hour and a half we made it to Vancouver Island and drove the 40 minutes into Victoria. We headed straight to the convention centre to pick up our bibs/race packages and shirts. Honestly, it was nothing to write home about like most of the expos here. You guys in the States really know how to put on a fair (hello, Rock ‘N’ Roll). However, we got the best New Balance race shirts (see picture near the end)! I don’t think I’ll ever run in mine since it’s so nice. We didn’t try them on before the race since we figured it would be some sort of bad luck…
The rest of our Saturday was fairly normal. Colin’s got extended family in Victoria so we visited with his grandmas and then headed to his aunt and uncle’s place where we were staying. We just hung out in the evening and had a great spaghetti/garlic bread/salad dinner (with home-made lemon meringue pie!). Colin watched a movie while I watched the Canucks home opener (NHL hockey) and then we started to get our stuff ready for Sunday. 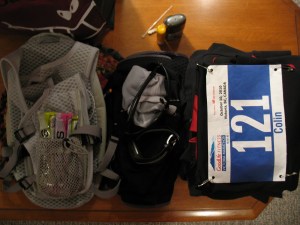 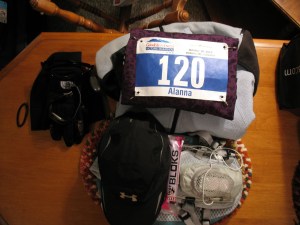 Our shoes!
Now, if you go back up and look at my race day outfit you will see how close to perfect the bib is pinned on. That took me half an hour and most of my sanity. I really hadn’t worried about the marathon all week (by way of ignoring it) and for some reason that bib was my trigger. I just could not get that stupid thing straight! And it killed me. I totally had a mental breakdown and lost it at Colin.
Our conversation went something like this:
Me: “I can’t get my bib straight.”
Colin: “Well, try again.”
Me: “I DID. IT”S NOT WORKING!!!”
Colin: (frustrated) “What am I supposed to do about it?!?”
Me: “Nothing! I don’t know! I haven’t worried about this f-ing race this whole d**m week and I think that I’m f-ing entitled to FREAK OUT ABOUT IT NOW!!!”
It really wasn’t funny when it happened, but, man, is it hysterical now!
We went to bed at 11:30pm since we’re so smart. It’s not that we were too excited to sleep, but rather too lazy to crawl in to bed any earlier.

Colin at the car.

Me at the car.
We went home to get showered, changed and relaxed and then went out to dinner. We had certificates (yay, free dinner) to The Keg Steakhouse. We’d planned to have a later dinner, but it was a holiday Sunday and, not only were the stores closed early, it was freezing so we showed up and had our meal at a normal time. My excuse for the huge plate of food was that I just ran a marathon and needed to have lots of protein! 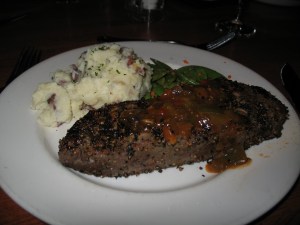 Colin’s dinner: who doesn’t love half a plate of beef? 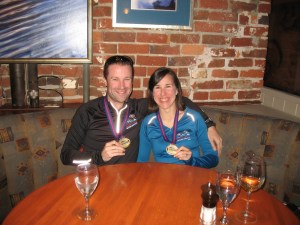 I kid you not, the waitress asked what place we finished!
I had to explain that everyone got a medal…
Here are a few closing touristy shots of Victoria: 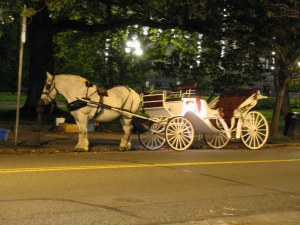 The Empress Hotel: hoity-toity fanciest hotel in the city.

This entry was posted on October 15, 2010 by lovemyrunners. It was filed under Goodlife Fitness Victoria Marathon, marathon, race report .