Actual Route (we only got a little “lost”)

On Sunday I had my longest run ever! It was a whopping 29km (or 18 miles). As a change of pace we went downtown to run around Stanley Park and out to a couple of the local beaches. It was a perfect day. A little too hot, but the breeze off the ocean made up for it.

As you can see from the above maps I didn’t quite hit the whole distance. There were 5 of us running together and, as none of us had a written route, it was kind of a hodge-podge of what we could all remember from the email. It was technically 28.3km, but by the end all of us were in need of water and food so we called it as it was rather than run the last little bit.
I tried out my sample pack from GU on this run and had a couple of hits and misses, but at least I know that now not further down the road. I think I’ll just stick to the ones that I already love. 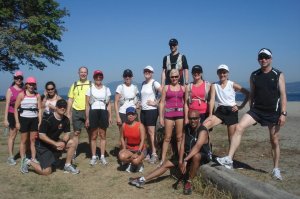 The group at the turn-around.
Once Colin and I got home I figured that I’d throw in a little core work as the Hard Core Club challenge was starting (and I was already sweaty and gross). I only did 7/13 exercises, but it was better than skipping… and I just ran 29km so I figured I deserved the break!
* Started Legs Love Lunges challenge today – 10 per leg. Not much, but it’s a start…

This entry was posted on August 16, 2010 by lovemyrunners. It was filed under beaches, core, long run, lunges, Stanley Park .